*The audio bug has (hopefully) been fixed*

(For explanations on the implementations on the themes read the Freddy and Bonnie sections.) (To find out about the diversifyers used and why "NES" read the Foxy section.)

For the people curious about the sequel:

I am currently working on fnaf 2. Finished are the animatronic movement patterns as well as the office and camera. I'll still need to do the audio design, minigames and custom night.

Feel free to ask me any questions in the comments!

-Tech Rules: Made a YouTube video about the fnaf AI (Link)

"Hello kids and adults, it's finnaly time. To welcome you at Freddy Fazbear's pizza! You will be able to enjoy lots of games and activities, but mostly you will be sitting in a dark room at the end of a hallway asking yourself why this place isn't connected to central power."

"You will spend up to six nights, custom night might be added in a future update, in said room. You will look at cameras, turn on flashlights and close doors and all that just for a lousy boss that probably doesen't even appreciate your work!"

"Speaking of boss; One of the two themes for VimJam 2 was 'Boss'. The developer put much thought into this of course, although I don't really like this! He says that the player plays as a nightguard, therefor he must have a boss... I on the other hand consider myself the boss of this game!"

"You can interpret this however you want though"

"Welcome to Freddy Fazbear's pizza! I think my good ol' friend Freddy Fazbear has already introduced himself. However he did forget something. Poor guy, has been singing the same songs for twenty years and he's never go a bath..."

"He forgot to thell you that there's actually another theme! Yeah, Vimlark and 8 Bits to infinity really went for it. The other theme is 'On the edge'"

"Boss is more something like a requirement. And let's be honest, I am actually the boss of this group! Anyhow, the developer really went for it here. Rumor has it, he took over two days to actually find a game that could fit the theme and he still isn't entirely sure if it fits."

"On the edge, the thoug proces probably was something along the lines of; 'Jumpscares are like a really big thing in these games and because you probably don't really like being jumpscared, you'll be on the edge of your seat while playing.'"

"I think it went something like that, but I can't see inside his head! Just go ask him yourself, do I look like a pigeon to you?"

"This jam has diversifiers, not few in number, some of wich he chose, our initiator. Yarrr, he chose 8 bits, the NES fits the kits of 8 bits."

"Yarrr, Meticulously he followed the rules, he placed the jewels and used his tools, did he succeed?  I hope you acceede. It might not be perfect, but in only one week to tweak the weak code he wrote."

"Yarrr, now please enjoy the game, in the end there's only one aim, create something beautiful that is not to lame. I hope you don't hate, what he did create, please rate!"

"Yarrr, Rhyming is hard, why is this a trait, did pirates actually make this their fate? This does not matter as my time is up, please stay here and line up and good play my cubs!"

other than that, this game is pretty cool

Reply
ayo the pizza89 days ago

very disappointed cause i cant use my controller but it is amazing.

Hope you are doing well in fnaf 2

do you have a rrelease date for fna 2

I am actually very close to finishing, it's just that there are more bugs than on a dead horse's body... Once I've got a version that is playable it'll be published. I can't give an acurate date but probably before july 14th. Maybe. Hopefully...

You know, i joined just to say i'm compelled in this demake of FNaF, but unfortunatly, you left out some stuff, that may be intentional due to the low sound fidelity and processing capacity. But if you want to take suggestions, let me know...

By the way, you probably don't have a exe version of this, do you?

"More bugs than on a dead horse's body?" Damn. That's funny af, but seriously, I hope it all works out! I can't wait to scare myself again. :)

Uhm how do you play

to change camera is left or right arrow

when switching from cam 11 to cam 1, chica's cupcake flashed for a brief moment? Anyone else getting that?

This also happened to me

Who else got into a staring contest with Bonnie on Night one while he was on the stage?

And played with the doors and caused yourself earrape with them?

Just asking. (I did)

Any news on the second one? (sorry if there isn’t going to be one I just remembered seeing a post about it somewhere in the comments)

There is going to be ona and I am currently working on it!

Unfortunately my sound guy just kinda vanished, so I'll have to do that myself, wich might take some time. But the development is finally comming along great.

I wanna say that it could be finished by the end of may, but please don't quote me on that.

not wanting to be arrogant (but being lol) this game was even better than the original because of the graphics (I think).

man, why such a bizarre bonnie?

Thanks for the compliment! That's rather flattering than arrogant.

Why is bonnie bizarre?

You're not bothering anyone! As a gamedev I really like criticism because it allows me to improve my games. Don't be afraid to tell people when they're doing something wrong.

no, no, you didn't do anything wrong, the game is perfect the way it is

That IS a bizarre Bonnie. I just now noticed it!

is golden freddy in this

I love you too!

thx LOVE ALL OF YOU

IS there a release date for the second one yet

right?? why is he so weird looking??

Not as great as it could be...

This is so well made, and I love it. The graphics are beautiful and have that perfect classic feeling. It's very comfortable to control as well. Overall, this is a very pleasant experience.

very well made, idk if this is a bug but Freddy will come out of no where and jumpscare when I never saw him leave the stage.

Glad you liked it!

On wich night does the glitch occur? Could it be that another animatronic is jumpscaring you but it shows the wrong animation?

Night 5, and I don’t think it’s another animatronic, I checked both doors right before it happened no one was there. Plus I saw most of them near the dining area.

awesome luv it. any progress on fnaf 2

Currently working on it! But I'm really unhappy with how the office looks, will revise that...

What is the door keys?

i would love to play it on an emulator

Do y'all have any plans to make it a nes rom, or make it play on some type of Nintendo hardware?

the description is so cool lol. great game!! good job :33

Quick questions: How long will FNaF 2 take and what will be the controls and what percentage is FNaf 2 complete of?

How long will it take: No idea, at this rate the clesest to a release date I could give is March.

What will be the controls:

The gamepad controls will be mapped to a keyboard, but I don't know how yet.

How completed is it: About 12%, I'm currently working on the craphical assets, which takes a lot of time.

I hope that answers all your questions!

Thanks! also btw, why isnt there download versions? it keeps resetting me to night 1 each time  i play again, also do you have a discord i can friend req to see the progress of the game? if so then okay! (btw are you gonna make animated jumpscares?)

Fnaf 2 NES will be downloadable!

I would really like to have animated jumpscares, but unless I find an artist that helps me out this would probably be to time consuming.

thanks for the response! ive already added you on discord! you can maybe try making animated jumpscares, it will take alot of time, but you have a game that almost took forever and its not even that popular! maybe sometime dawko or fusionz or marisu will play if you make animated jumpscares! they make the experince more frightning, also, for a solo game dev youre pretty good at making games! (are you gonna make custom night tho?)

I want fnaf 2 to be the full expierience. So custom night, minigames and even easter eggs will be a thing!

game e awsome but can you make a fnaf two version

Already workin' on it!

wow thank you for my feed back so quikly

Feel free to recommend these games to whoever you like!

do you need any help on the games sounds for fnaf 2 because i want to help you for make this game's audio sound cool. plz

Sure! I'll take any help I can get! My Discord is WAISFOWAG#4387

thanks, what sounds do you need. send me a list. and ill send links to through this chat, oky

add custom night please other than that it's really fun and stressful! you did a great job on porting this game to a nes style game that is easy to control and play

Great game you can connect some NES like controller, map buttons and play it. It would be interesting if there is an actually physical port for the NES because it fits and should be able to run on the NES.

If you have a controller hooked up to your pc, you can play with it!

But I don't think, that it could run on an nes because the code might be to suvvisticated, but mostly because of the static. The static would probably fry the nes's 2kb ram. But who knows, maybe a fnaf/nes enthusiast might attempt such a thing...

So basically this can run on almost anything!

Pretty cool and interesting how you put a complex game like this. Kind of scared me when bonnie just teleported from the stage to my door. 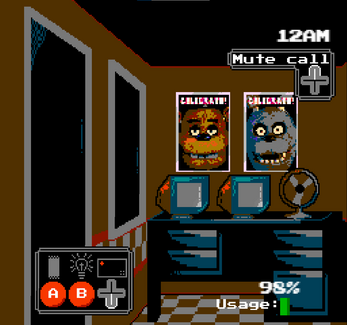 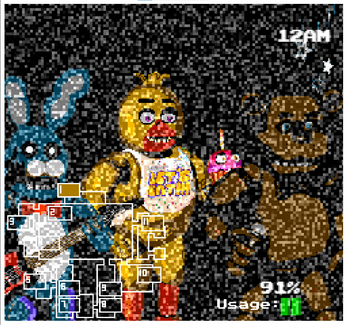 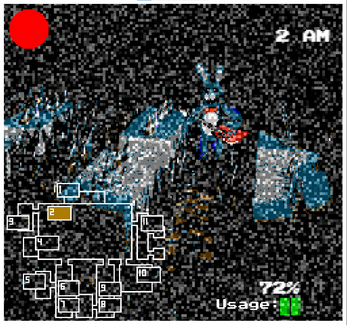 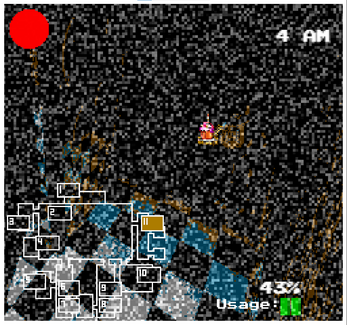